Salams lovely people…hope you’re all well…sorry for the extremely late blog post..My life since February has been so hectic. Firstly it was family weddings, which as you all know how busy those can get.
I have so many posts planned but actually getting the time to post is another thing..worse thing was though I had taken so many step by step pics of different dishes and my silly iPhone messed up, I didn’t back up the pics and I lost them all. So I’m having to start from scratch again.
This time round I thought I’d post a recipe for something sweet, something fluffy and moist and makes you feel warm and fuzzy on the inside when you take a bite from it…I saw this recipe on one of those videos posted on facebook by Bake n Bake but I tweaked it to what I thought would be suitable. I love cinnamon and these cinnamon rolls are heavenly, a lot of people who have tasted them have said they’re just as good as the real thing. If you do try them out let me know what you think.

FOR THE CINNAMON SUGAR TOPPING:

FOR THE CREAM CHEESE TOPPING:

In a Saucepan Heat 1 cup milk until bubbles start appearing round the edges of the pan, turn the heat off and stir in the half cup (113g) soft butter into the milk until melted, add 1 cup warm water, stir and leave to cool to room temperature

In a separate bowl (I use my kitchen aid bowl) add 1 Tbs yeast and 1 cup caster sugar, 1 tsp salt, 2 large eggs, 2 cups strong white bread flour or plain flour and mix
Add the milk mix and blend, add 4 more cups of the flour half Cup at a time until it becomes a very soft dough. If the dough is still sticky add some more flour but not too much as you don’t want the dough to be too hard otherwise the rolls will not be fluff and soft.
Lightly flour a surface and knead the dough for around 5-8 minutes…divide into 2 parts and roll out into rectangles.
Prepare the Cinnamon sugar topping by mixing together 2 cups dark brown sugar and 2 tsp cinnamon, spread quarter cup of the softened butter on each of the rolled out dough and sprinkle each with  with the cinnamon sugar, roll tightly into a cylinder
Slice the rolls into 2 inch pieces and put onto a greased tray, cover with cling film or a clean kitchen towel and let them rise for 1 hour or at least doubled in size.
Once they have doubled, remove the cling film and bake in the preheated oven on gas mark 5 or 180 degrees for 20-25 mins until golden. Keep an eye on them as they don’t want to be too dark.
While the rolls are baking whisk together 1 cups icing sugar, 350g cream cheese, 1 Tbs soft butter, half tsp vanilla essence and 3 tbs milk (1 tbs at a time)

Spread the cream cheese topping on top of the rolls generously and top with chopped hazelnuts or pecan nuts.
**This recipe makes around 24-30 cinnamon rolls** 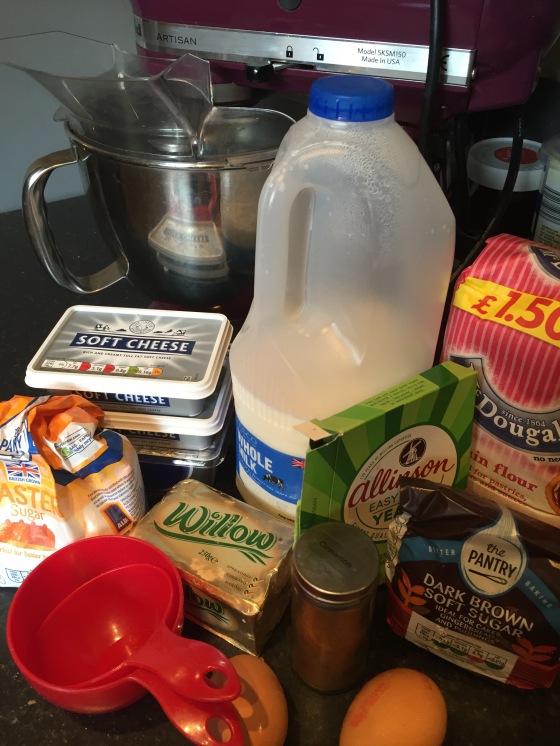 Here’s all the ingredients that you will need

Have ready 1 Cup Milk and half cup softened butter 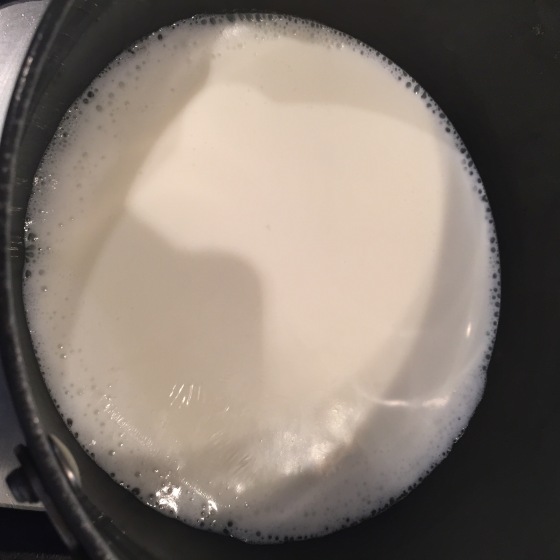 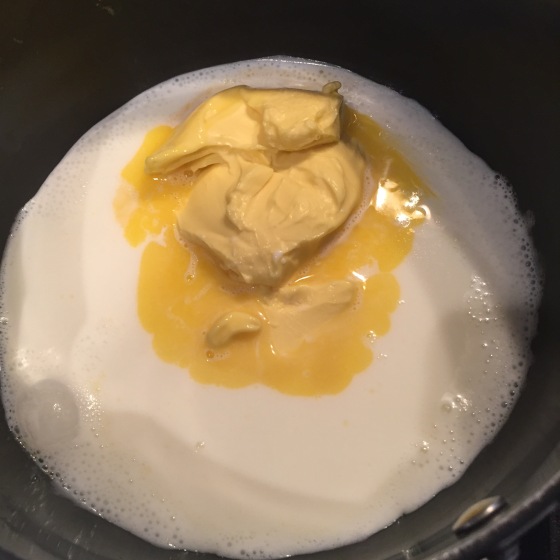 Turn off the heat and add the half cup butter

Give it all a stir and leave aside until room temperature

In a separate bowl add the yeast 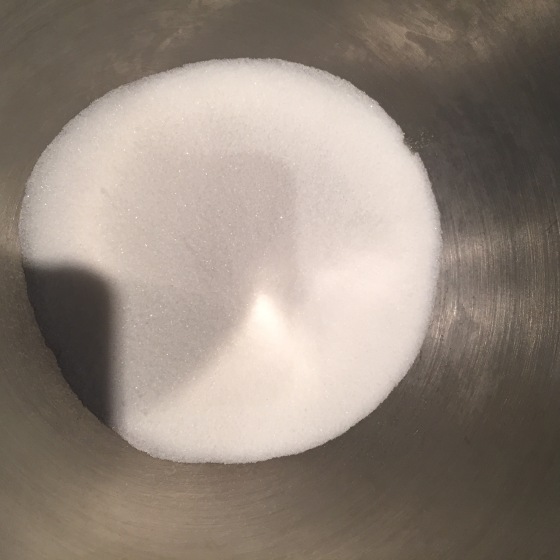 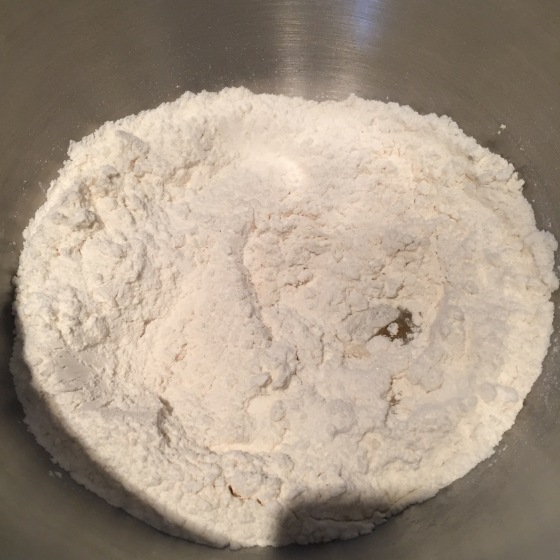 Add 2 cups of the flour 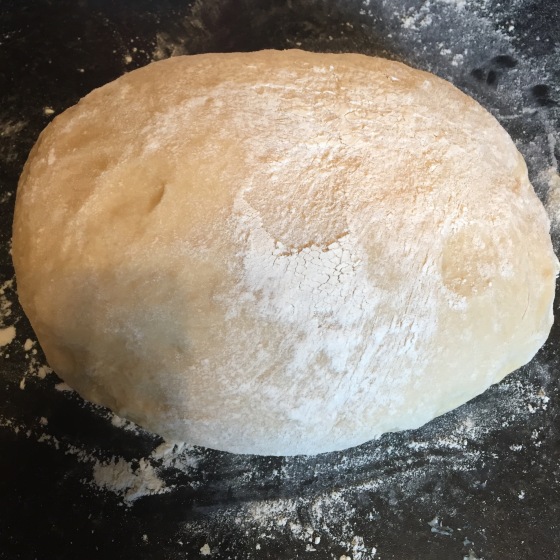 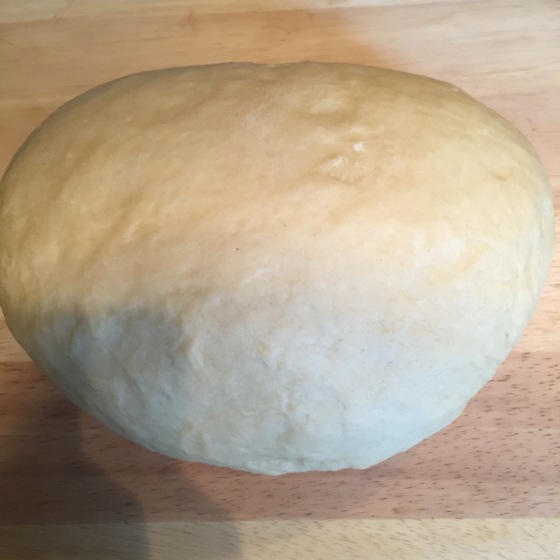 Knead for another 5-8 mins until the dough is smooth 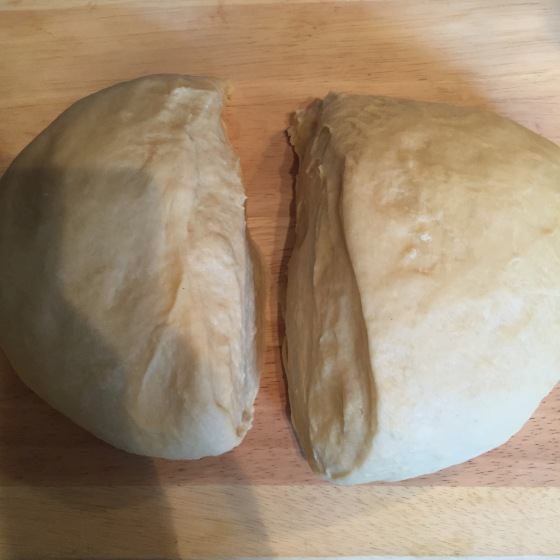 Cut the dough into 2 equal pieces

Roll them out on a lightly flour surface 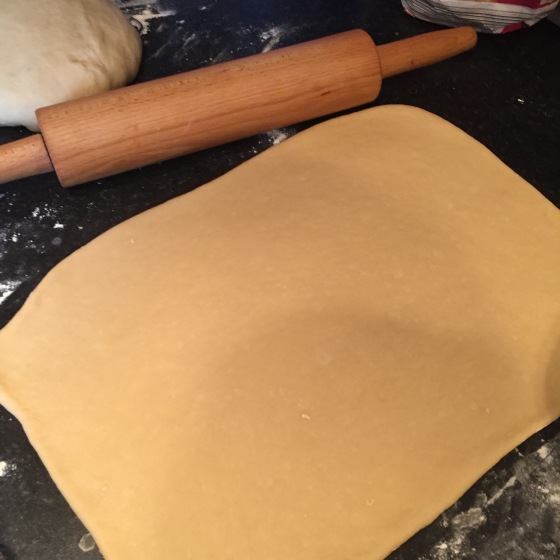 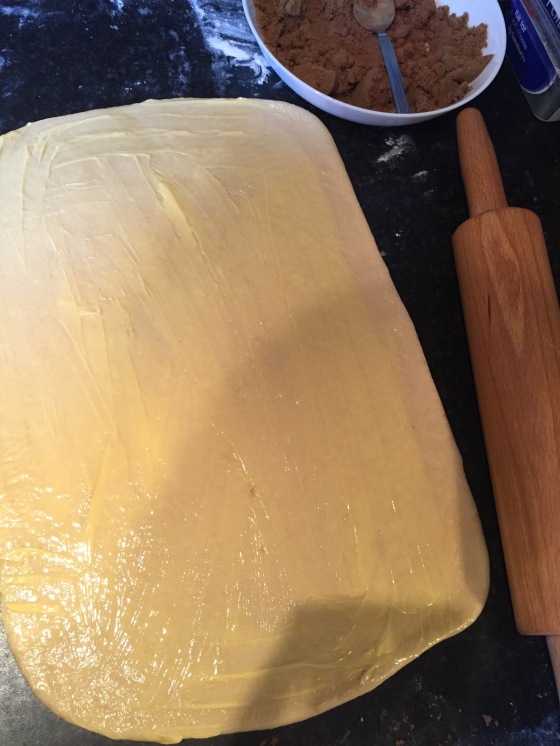 Mix together the brown sugar and cinnamon powder

Using half the sugar mix cover each of the rectangles 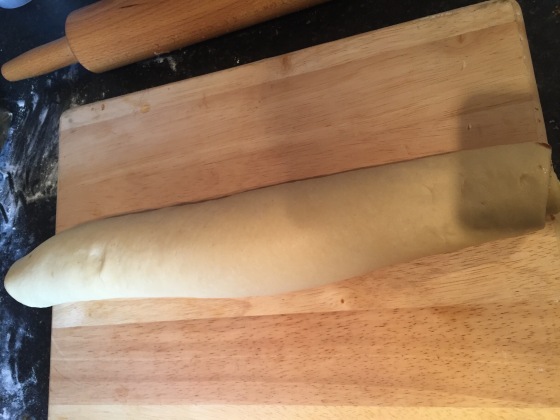 This is how it should look once tightly rolled 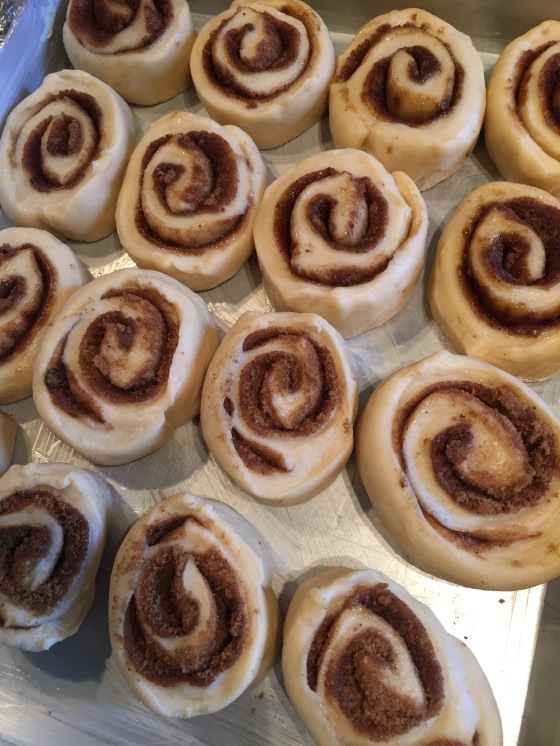 Lay the rolls side by side into a greased oven tray, cover with cling film or a clean tea towel 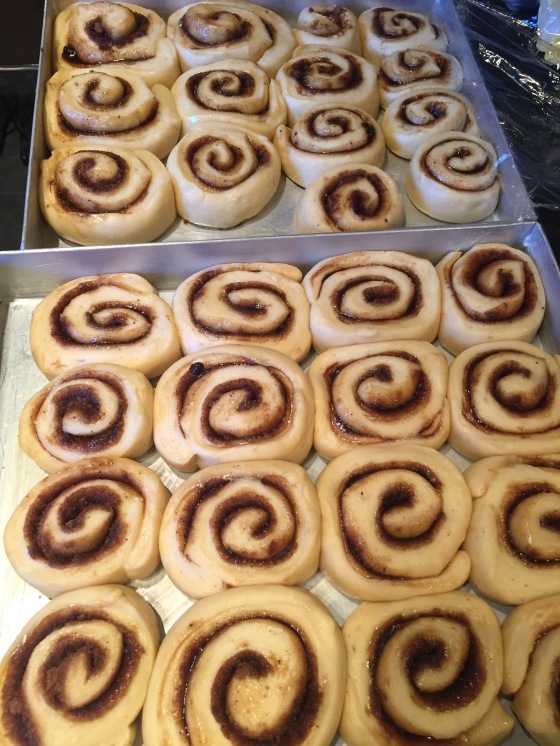 Bake in oven for around 25 minutes until golden 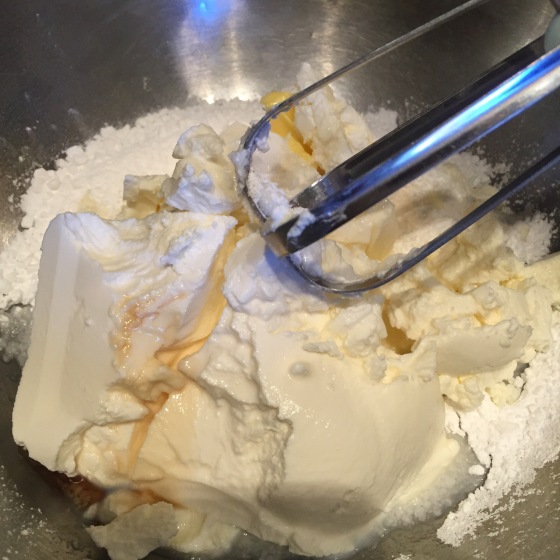 Whisk all the ingredients for the cream cheese topping

Whisk it till it’s nice and smooth

Salams all…you’re all probably wondering if I’ve given up on this blog…no I haven’t…I’ve just had the most crazy few months after Ramadhan, family weddings and just life generally has been crazy hectic..I’ve hardly had time to make anything different and exciting.  Last weekend I managed to get a few spare hours and as I had been craving Carrot cake decided to make that.  This recipe was given to me by my aunt and it’s one of the moistest carrot cake I’ve had…packed with lovely walnuts with a subtle hint of cinnamon…

Line and grease 2 large or 4 small cake tins and equally pour in the cake mix.  Bake at Gas Mark 3/Electric 170 for 30/35 minutes until baked, insert a knife or skewer in the middle of the cake to make sure it’s cooked.  Turn out the cakes onto a wire rack and cool completely.

For the icing, thoroughly beat the 3 ingredients until smooth and spreadable, spread evenly onto the cakes and sprinkle chopped walnuts on top.

TIP:  Grate the carrots in a food processor with the grater attachment…makes life easier

All the ingredients ready for baking 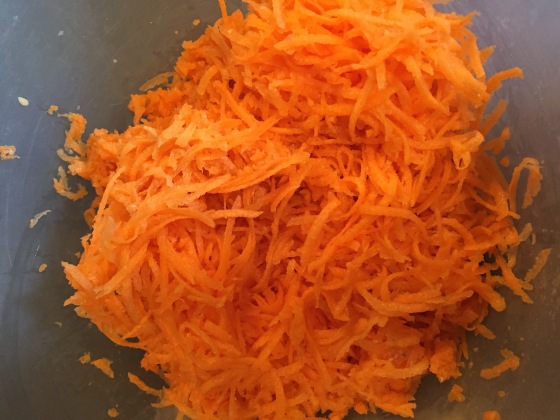 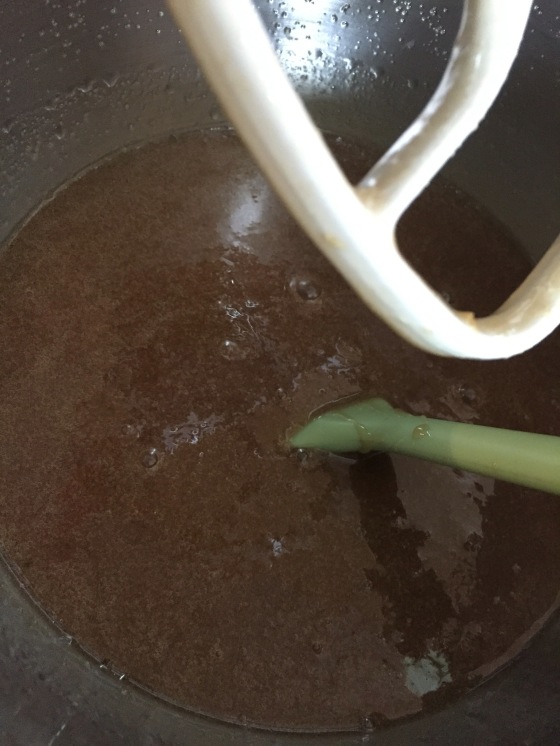 Mix together the brown sugar, eggs and oil

Add all the dry ingredients and vanilla essence 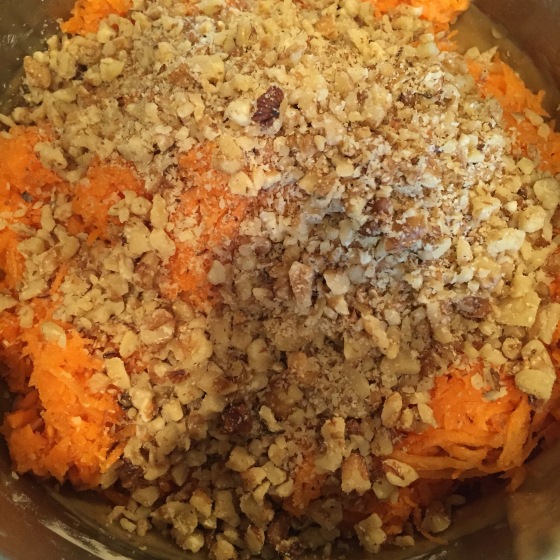 Add the grated carrots and walnuts 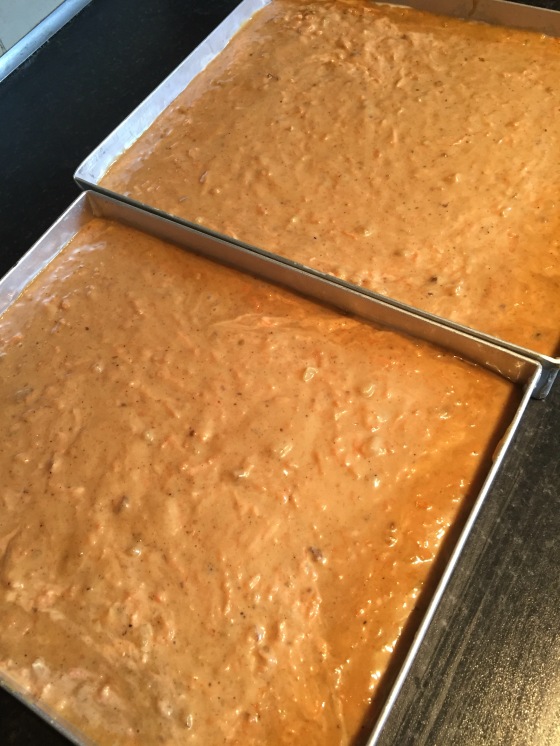 Cut into even slices and it’s All Ready!!

Salams all…pray that your Ramadhan is going well…can you believe that we’re actually in the last week of Ramadhan..Not sure if everyone feels the same but I think this years Ramadhan has gone super fast…it’s just like its come as a visitor and is leaving us 😢 I feel very sad…but now also begins our Eid preparations…I’m just posting this quick biscuit recipe…it’s the most simplest of biscuits but I find is one of the tastiest…lovely on Eid day with your Eid Milk that Mum has lovingly made ❤️

Beat the butter, oil and caster sugar until creamy ( around 5-7 minutes)

Add the Corn flour and baking powder and beat again until combined.

Fold in the chopped pecan nuts and Dessicated coconut and then add flour half cup at a time and mix together to form a soft dough.

Put logs in freezer for around 5 minutes and take out and slice into half inch slices.

Put onto a non stick tray covered with greaseproof paper.

Allow biscuits to cool and then drizzle with Melted Chocolate and Allow the chocolate to set. 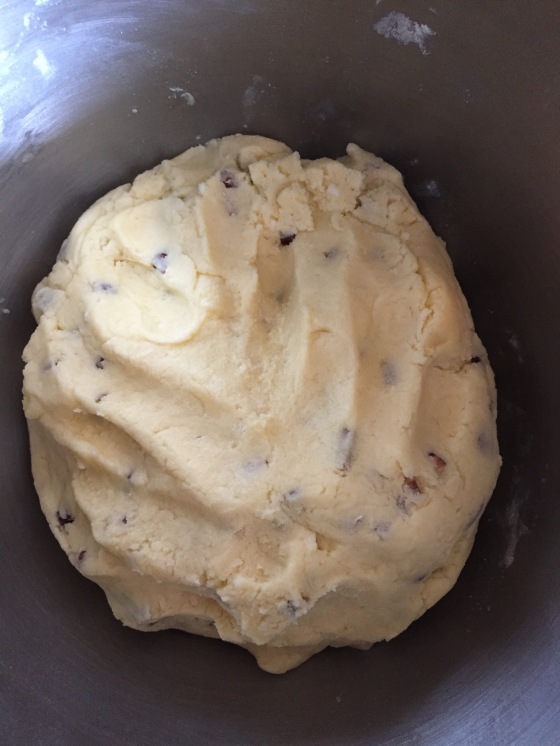 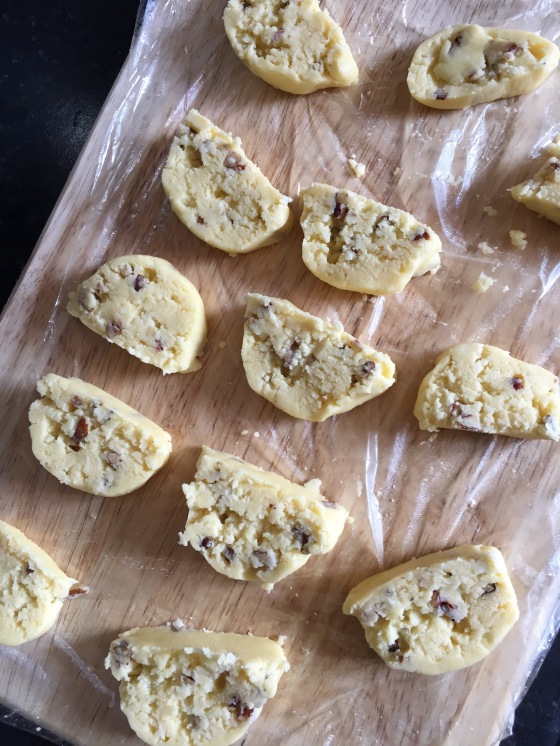 Ready to be baked 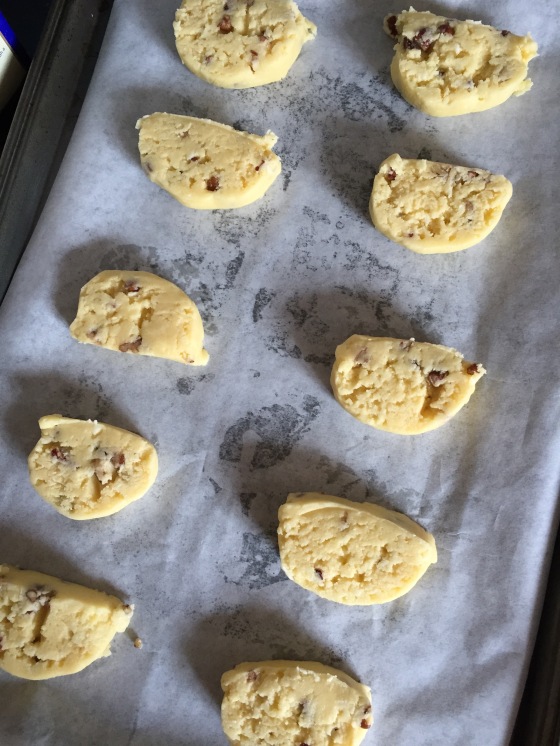 Fresh out the oven (they smell amazing)

Salams all…I think I’m posting more recipes in Ramadhan than I have done since I started the blog 🙈 Having some much needed time off work does help especially in Ramadhan..this is allowing me time to really gain the Baraqah of Ramadhan…anyways I’ve had a lot of requests for the Pappa roti recipe..Prior to making these I had never tasted these buns although I had heard a lot of good things about them and I thought if I can’t get to a Pappa Roti cafe then next best thing is to make them..anyone who hasn’t tried them yet it’s a light and fluffy bun with a lovely buttery filling and has a coffee icing which melts into the bun as it baked…then you can eat it on its own or with different toppings for eg Nutella, cream cheese icing or anything u like..I searched online for a recipe but most seemed very long winded..this recipe was given to me by a friend but there’s also a video online by Steves kitchen giving you step by step instructions here…hope you enjoy them and let me know how you get on.

16 small cubes of butter (freeze in a tray until frozen)

In a stand mixer (or if kneading by hand in a large bowl) mix the flour, sugar and salt, then add the yeast and mix again, then add the milk and egg and mix on high for 8 minutes, add in the butter and mix for an additional 5 minutes until the dough has all come together and is smooth.

Layer a tray with greased roof paper. Divide the dough into 16 equal round balls and leave to rise in the tray for around 10 minutes. Once risen take each ball and flatten with the palm of your hand, turn it over and place a cube of the frozen butter piece in the middle and close the bun by pinching making sure it’s closed completely. Cover and leave to rise in a warm place until doubled in size so around an hour.

While the buns are rising you can make up the coffee icing.

Mix the icing sugar and butter until soft, then add the eggs gradually and mix, add the coffee mix and then slowly add the flour (use enough to make a soft icing) Fill up an icing bag with a round tip nozzle attached (if you don’t have a nozzle then just snip a bit of the end off) Leave in fridge until needed.

Once buns have risen pipe the coffee icing on top of the bins in a spiral shape and bake in oven at 180 degrees or Gas Mark 4 for 12-15 minutes until golden.

Top with any of your favourites (Mine is obviously Nutella) golden or maple syrup or cream cheese icing.

TIP: These buns can also be frozen without the icing to bake on another day, just defrost and bake as stated in the recipe.

The buns after they have doubled in size 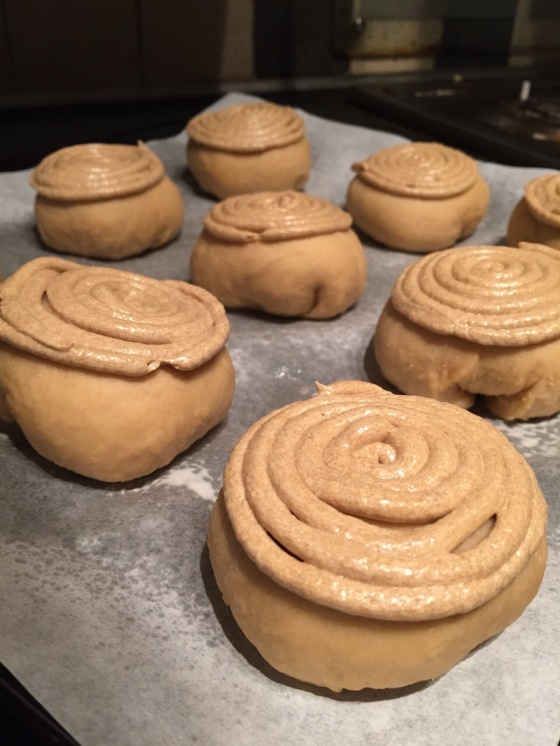 Bake in oven for 12-15 minutes until lovely and golden

Drizzle (or douse) with Nutella and chopped pecan or hazelnuts 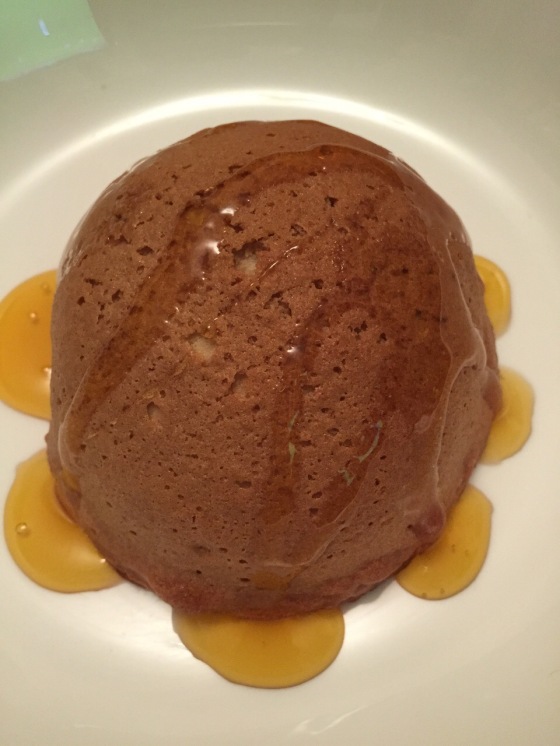 Look at how fluffy and buttery the inside is…mmmm…perfect 😍